To set the scene, Hamish & I were embarking on an overnight train from rain-lashed Batumi on the Black Sea Coast of Georgia to Yerevan, the splendid capital of Armenia. We had booked a berth each on the overnight sleeper and were hoping against hope that we had a private compartment.

We were therefore somewhat displeased to find four berths were awaiting us, but started hoping again when the train left with us remaining as the only two occupants……..

Nineteen short minutes into the scheduled sixteen-hour journey, we pulled into a station named Kobuleti and were dismayed to see a crowd of people on the platform. Our worst fears were confirmed when our fellow occupants revealed themselves to be an eighty year-old Armenian lady who travelled with her daughter, who was herself aged in her mid to late fifties.

They were clearly unhappy to be travelling with a couple of ‘young’ male foreigners. Much discussion was held between the pair followed by fractious debate with the train crew.

They either wanted out or wanted us out. This would never have happened in Turkey where you had to enter your gender when you booked, so strangers of the opposite sex couldn’t even sit next to you in broad daylight, let alone be up close at nighttime in a sleeping compartment.

It was tough luck on us all. The train would be full, so we were staying put whether any of us liked it or not.

The daughter then revealed they were travelling with their cat and asked if we had a problem with this. As she asked this, she unzipped one of her bags and the cat’s head popped out. All the while she had been bartering for a compartment change, the cat had been shut inside a holdall.

Tiddles seemed OK with that arrangement however, emerging with a meow of greeting and a lick for her owner. Neither of us objected, even when the truth of what would inevitably happen when the cat’s toilet was placed on the floor dawned on us both.

I had smelt enough cat ‘doings’ in my time to know that it would not be a pleasant experience if the litter tray (a plastic bowl with newspaper inside it actually) was used at any time, especially in the wee (excuse the pun!) small hours.

It would most probably have been futile to object anyway, although a cat flap would have come in very handy. At least then the feline facility could have been left outside in the corridor.

It also transpired that the cat was blind, so it had to be picked up by the owners every hour or so and placed by its pussy pisser just in case the need had arisen. After four hours of our co-existence, the daughter decided it was time for forty winks and clambered up the fold out ladder to the top bunk. Mother lifted up the moggie, who was soon fast asleep beside her mistress.

As night fell, Hamish and I downed the blonde beers we had bought in Batumi and soon afterwards my big-eared pal drifted to sleep. In the time it took for him to then wake up for a pee, Tiddles had done her own business. You guessed it, the inevitable happened!

My sock footed friend, kicked the half full latrine and ended with cat urine soaking into his right foot. Yuk!!!

The ladies apologised and handed Hamish some tissue. He was all of a fluster, whilst I was sniggering like Mutley from Wacky Races. Off to the loo he then hopped, left boot on foot and right boot in hand.

He returned ten-minutes later without both the offending sock and it’s twin, both now lying on a Georgian railway line. I wondered how long it would be before some urchin had Homer Simpson adorning his feet!

Fifteen-minutes after sockgate, we arrived in Tbilisi right on time at 21.40. According to the timetable that I had printed at home we would be here for over thirty-minutes, so decided to go on a mission to find us some more beer to quell the cat pee smell, whilst Hamish contemplated whether there was indeed room to swing the cat!

I roved around the three floors of the train station, but sadly no beer was on offer anywhere so returned empty handed.

Whilst on my failed beer mission, the cat woman had been negotiating a swap deal. She, her mother and their cat, would be moving to be replaced by a very pleasant Danish girl and her equally amenable partner, a Californian guy unusually named Tychoe (we didn’t ask where the name came from, figuring he must get royally pissed off answering that one).

Did we mind the change? Not at all, but it was nice of the ladies to ask. It took them ten minutes to move their stuff out, including satisfyingly the pussy’s potty.

Our new companions were a lovely couple. Both blonde, they had met several years earlier in Ecuador and now lived and worked together in Jutland. They taught gardening and garden design and were on a trip to see flowers in their natural habitat.

We chatted away very happily about this and that before being interrupted by the border guards, easily the jolliest I had ever encountered. It was now after eleven. We handed over the passports, but it seemed they wanted more from Yulia. She understood what they wanted and handed them a paper that satisfied them.

She explained that they had flown to Georgia with her mother, two brothers and their partners, so hired a seven-seater to get really local in the countryside. Unfortunately she committed a minor traffic offence and copped a €20 fine, which she had to pay at a post office. She was also told in no uncertain terms that she would not be able to leave the country if the fine remained unpaid.

Remarkably the offence had shown up on the passport check and without the proof of payment, Yulia and Tychoe would have been staying in Georgia a little longer. I would have been very impressed if this synchronisation had happened back home, so hats off to Georgia’s efficiency.

The train moved into no-man’s-land and the Armenian officials boarded and collected up a big wad of passports. The Europeans amongst us did not need visas but our new American friend did, so was handed a form to complete. The only snag was the visa form requested a photograph and Tychoe did not have one.

He joked to Yulia that he would see her soon and generally stayed amazingly cool about the situation. Here we were in the absolute middle-of-nowhere and he was facing ejection from the train and an escort back into a Georgian wilderness station, just like I had been on my first ever interrail trip in Yugoslavia.

I would have been pretty concerned at the prospect, as would Hamish, but the Californian dude seemed to be totally carefree. He was probably really duck-like (calm on the surface but kicking like crazy down below), but hid it really well if that was the case. He left the train alone and entered a small brick building.

Yulia joked as to his fate, but we were sure this was just bravado. When he returned ten minutes later with a broad smile on his face, the relief for the couple was palpable.

It was time to get to the serious matter of getting some shuteye in our ‘salubrious’ surroundings. We all did the pre-bed loo trip, not wanting to make that horrid four o’clock journey.

Door locked, lights out and sleep of sorts. Both Hamish and I did need an early morning loo dash, despite our best laid planning of the night before. We were now awake of sorts, the sun was up and we were treated to a lovely view of Mount Ararat from the train.

We arrived smack on schedule at 7.25, bleary eyed and needing caffeine.

We bade our horticulturist companions a fond farewell – well I mumbled anyhow, “hope you find some flowers.” I needed coffee badly! 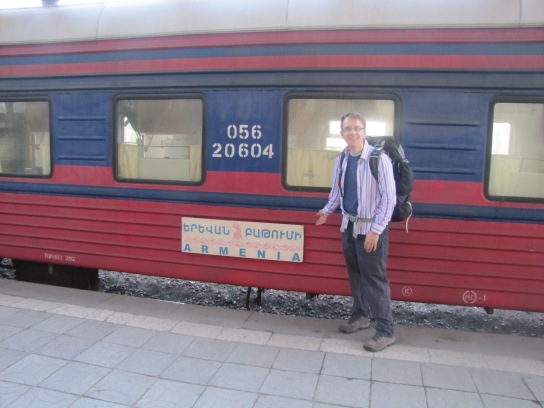 Relieved To Have Arrived Fully Socked!