in 2011 when Crimea was definitely still in Ukraine, Hamish and I took the twenty-five hour train journey from the Sevastopol to Lviv near the Polish border.

Our first leg took a couple of hours from Sevastopol to Simferopol where we boarded a 17 carriage train taking us northwards.

This article isn’t about the ancient train with fuming diesel locomotive, the open carriages with its uncomfortable berths, the large families crammed into small spaces enjoying a non-stop picnic of smelly salami and jars of pickled gherkins, the fascinating landscapes, the disgusting bathroom facilities or the communal tea urn, but a hilarious episode that has me smiling every time I recall it.

This scene takes place after breakfast, seventeen hours into the journey………..

An announcement instructed passengers to bring their bedding to the end of the carriage. We didn’t understand a word of course, but as everybody rose in unison, bundled their sheets, blanket and pillowcases together and carried them towards the imposing lady (a Hattie Jacques lookalike from the film Carry on Nurse), in starched white uniform, white peaked cap and the sort of slippers given away free at up-market hotels who was stood open armed at the end of carriage, we quickly got the message.

We followed suit but encountered a problem. Hamish could not locate his pillow, so had no pillowcase to return. Hattie J was counting everything in and demanded to know where my mates’ pillowcase was. 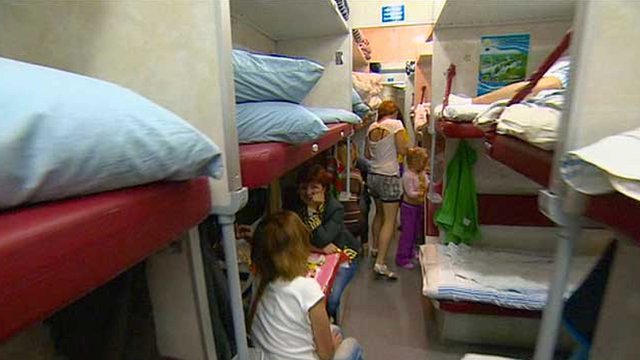 Again we did not fully understand the demands but knew instantly what the problem was and that it presented an issue for us.

There were at least ten people behind us now straining under the weight of their bundles that included thick blankets. Hamish could only go bright red and shrug his shoulders. I really hoped that this body language universally meant ‘I don’t know’ rather than being some sort of insult in Ukraine!

In any case, Hamish was commanded to stand aside and wait. He understood the hand signals and imperative tone perfectly and obeyed instantly.

I had to stifle an enormous belly laugh welling up inside me as he stood there awaiting his fate like a naughty schoolboy.

My four items were counted in and I was free to go. Taking pity on my friend, I joined him in waiting. The expressions of the fellow passengers as they handed in their bedding were unforgiving. I wondered whether in previous times Hamish’s crimes could have led to a spell in some Siberian salt mines. You would have thought so by the stern looks that were now pointed in our direction.

The rest of the bedding was counted in without incident and Hattie then beckoned us to follow her to our seat. When there she bellowed to our section companions, clearly asking who had the missing pillow. Either nobody had or were not admitting to it anyway. You would have to be pretty desperate to pinch a Ukrainian Railways issue pillow that had lost all ability to cushion your head comfortably many years before.

Thankfully we were spared the ignominy of everybody in the vicinity having to empty the contents of their luggage, boxes and bundles. Now that would have been embarrassing and caused a complete and abrupt end to any goodwill towards hapless foreigners.

Hamish searched his area one more time but no luck. We were then beckoned to follow Hattie once more, me going along for moral support (more like not wanting to miss what promised to be a very humorous spectacle!). The couple opposite shook their heads as if to say ‘this is no way to treat a visitor to our country’. This worried us somewhat and made the walk behind Hattie seem like the long march to the electric chair. We had no idea where we were going or what the result would be.

After eight carriages of gawping faces, we arrived at the guard’s room. Hattie explained the misdemeanour. ‘You must pay fine’ was the guard’s instant command. Not the most welcome news for Hamish, but at last some English instruction (no doubt well practiced), so at least now we knew that Siberia was off the agenda.

The swarthy guard with steel rimmed spectacles and cap several sizes too small, then stood on a wooden box to allow him to reach the shelf above him. He brought down a large black book, blew away the dust and leafed through its pages until he found what he was looking for.

He pointed out some Cyrillic writing with a number and symbol next to it indicating an amount of 80 Hryvnia. Hamish was about to get upset until I pointed out that this was about €5. Not too bad we supposed. However, he was not finished.

We figured this to be pillow, case and admin fee for €8 in total. Of course the guard had no change for a €10 note so that is what the episode cost Hamish.

I found the whole experience hilarious but Hamish did not yet find it funny and wanted to find the toe rag that had pinched his pillow and caused him such hassle. The fact that every now and then I started laughing uncontrollably, did nothing to lighten his mood!

We remarkably pulled into Lviv station on time, some seven hours after ‘pillowgate’. We were both suffering from numb backsides and stiff legs having sat for so long. We nodded farewell to our fellow passengers and Hamish had one last look for his missing pillow. I sincerely wished he had found it as it would have been fabulous comedy to see him try to get his €10 back!!

Have you ever had an uncomfortable incident aboard a train?

← Amtrak On Speed
In Monet’s Tracks →