I wanted to take a scheduled train in Cuba, but as they were said to be extremely unreliable our itinerary with G Adventures did not include one. Travelling by train from Havana to Santiago rather than flying as we did would have been my idea of fun, but at just under nine hours I may have been in the minority.

Our potential options came down to Havana’s famed Hershey train or the lesser known one from wonderful Trinidad de Cuba out to the Valle de los Ingenios that used to be home to the thriving sugar cane industry.

I explained in my post Sweet On Cuba how sugar production in Cuba came crashing down. Thankfully the train that used to transport sugar related goods and workers still runs. This was therefore to be our choice of Cuban train.

We marched down to the train station on our free afternoon to check out the ticket situation. The train would be leaving at 9.30 next day, but we would not be able to purchase tickets until 30 minutes before departure. 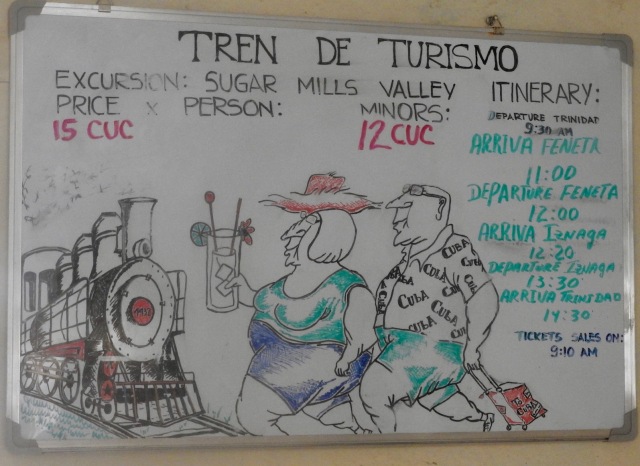 Touristic By Any Chance? 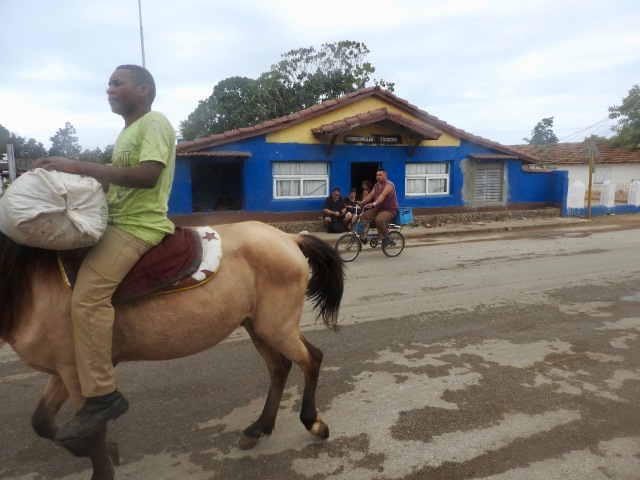 Hamish and I noticed some old trains situated on some dilapidated sidings, so decided to explore. A security guard immediately raced out towards us. 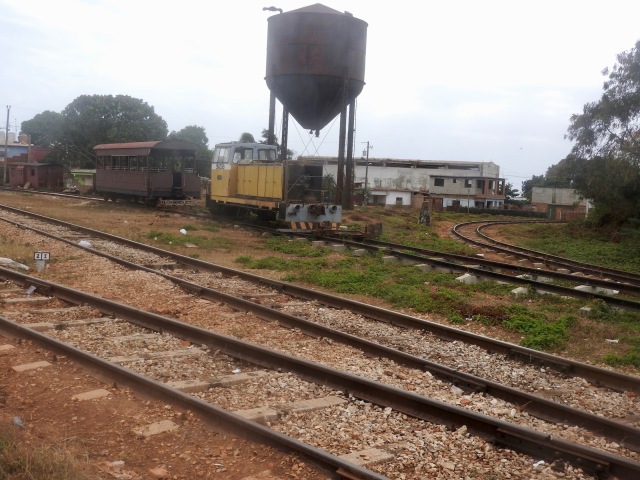 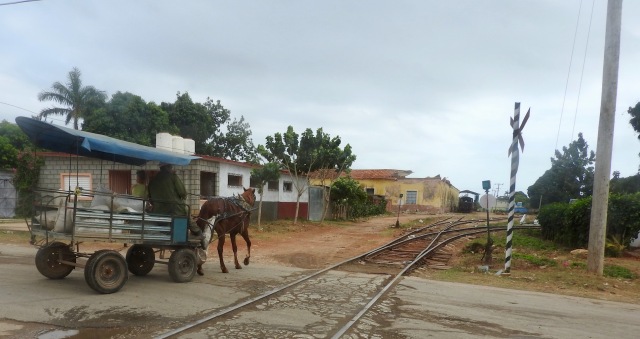 We were expecting a telling off but instead got a cheery invitation to climb aboard a 1914 US built oil and coal powered locomotive. 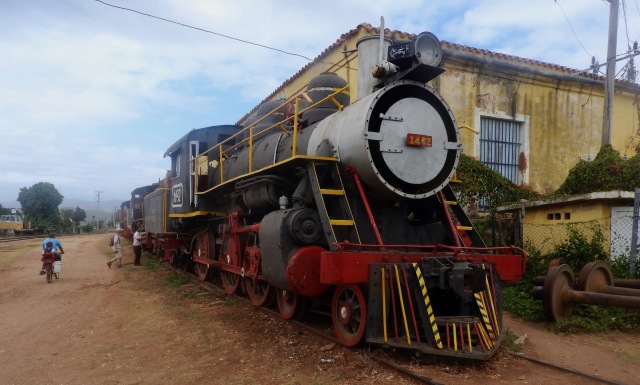 There were actually three locos lined up and we clambered aboard the front one. The guard delighted in showing us the lengthy dipstick, the coal or wood powered furnace and also gave us a demonstration of the train’s whistle. 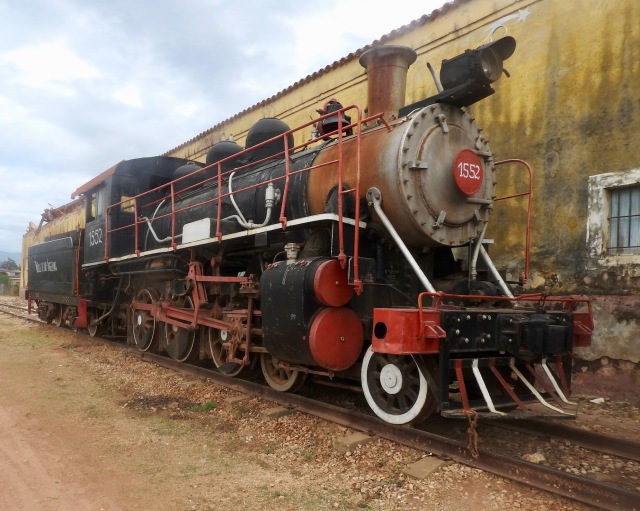 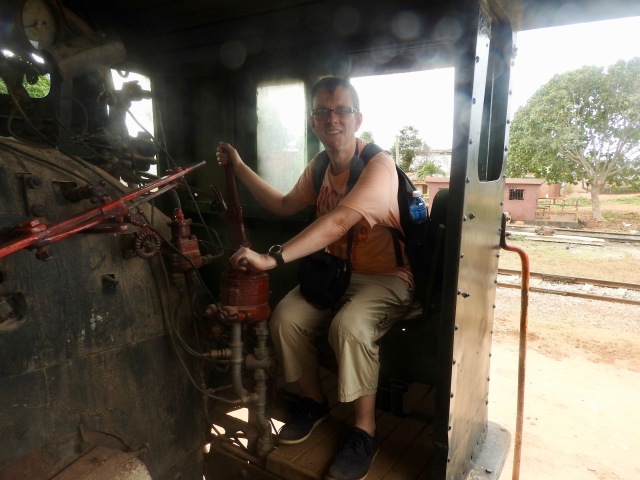 We then inspected an electric rail car that was in the maintenance shed. The wagon used to be operational, although we could not gather for exactly what purpose. The whole yard was a fascinating insight into days of old and the security guard was delighted with a few euros for his impromptu tour. 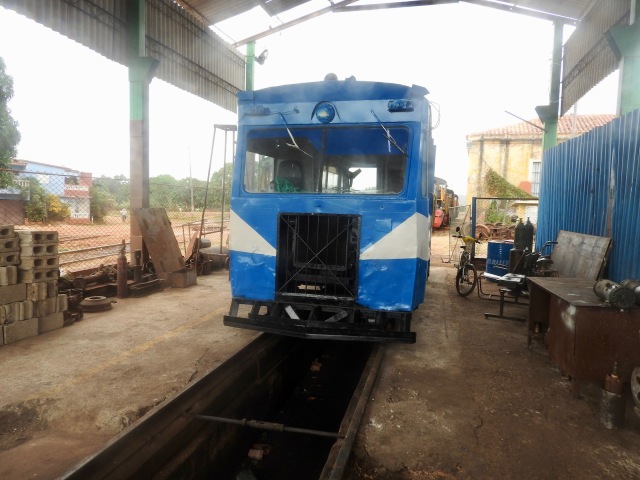 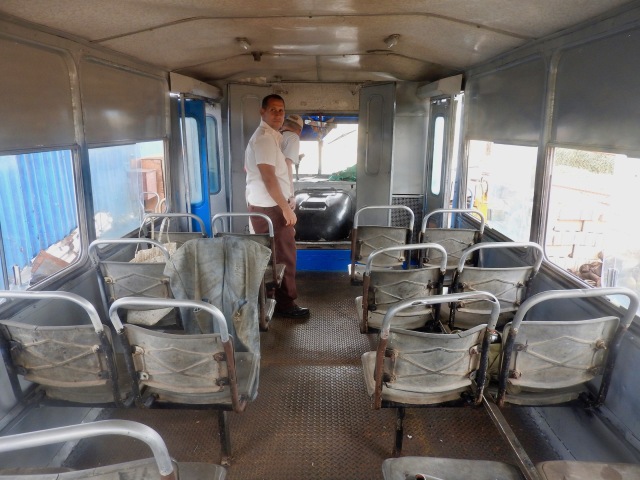 We happily returned to the amazing city centre, via a totally unplanned visit to the local cigar factory. Next day we hoped to be boarding a train proper……..

We arrived at 9 to the sight of dozens of ticketed passengers already stood waiting at the platform. Evidently the no ticket sales until the day of departure did not apply to French or German tour groups!

The signal came to board and we didn’t even have a ticket yet! Hamish was tasked with grabbing seats, whilst I and Mrs Wilbur were despatched into the ramshackle station house for tickets. Hamish fought off all comers trying to claim our saved seats and was mightily relieved when our heads popped above the parapet.

Soon after we were off. Our wooden carriages had two rows of bench seats either side of the aisle. Each bench sat two. There were four carriages in total (including one containing a rum & coke bar) and we were being pulled by a very similar oil fired loco to the one we climbed upon the previous day. 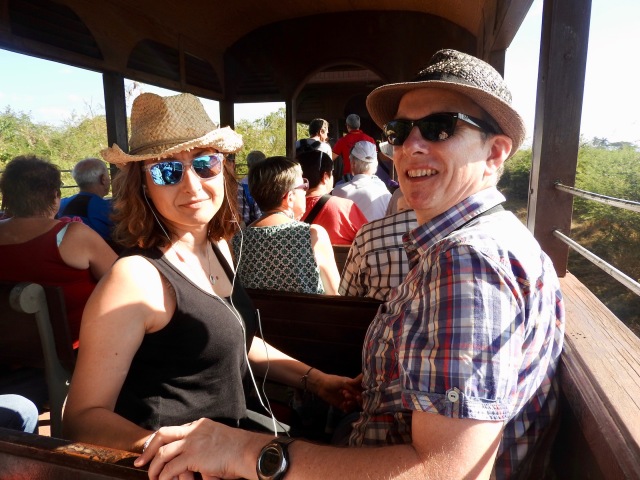 We soon pulled away from the wood and stone dwellings of the suburbs and out into the countryside. Houses gave way to fields, rivers, lakes and plantations of towering sugar cane. Sugar production still goes on, but is now for use of locals and a few neighbours. 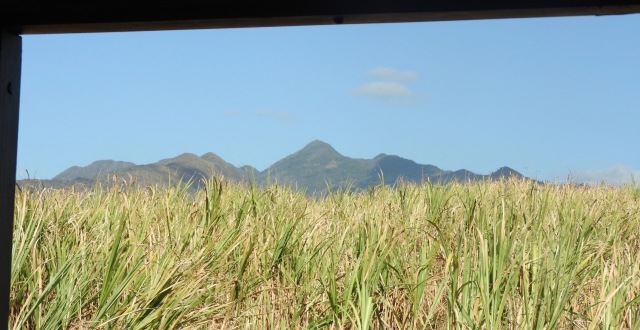 The train was a frenzy of zoom lenses – we were on tourist central, not quite as planned but fun all the same. It reminded me very much of the train to Soller from Palma de Majorca. 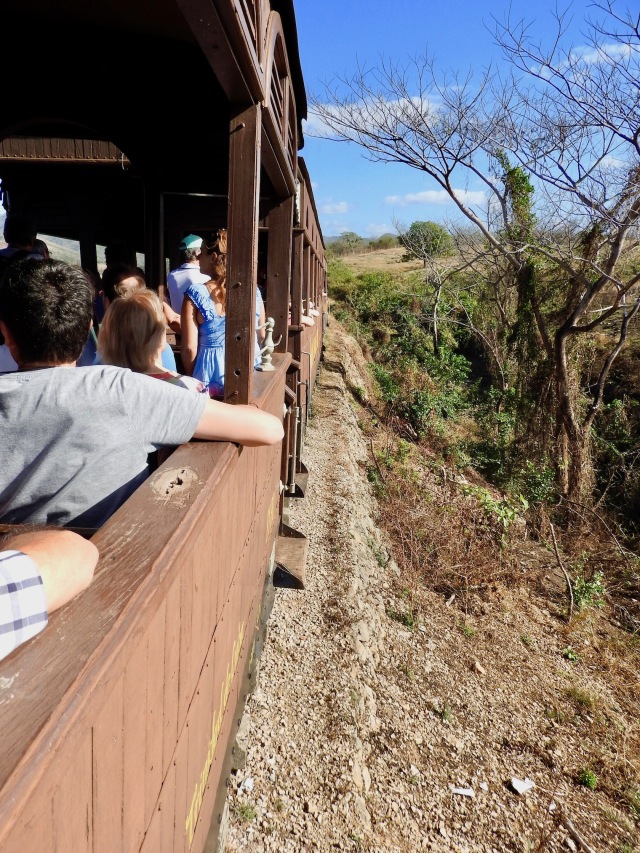 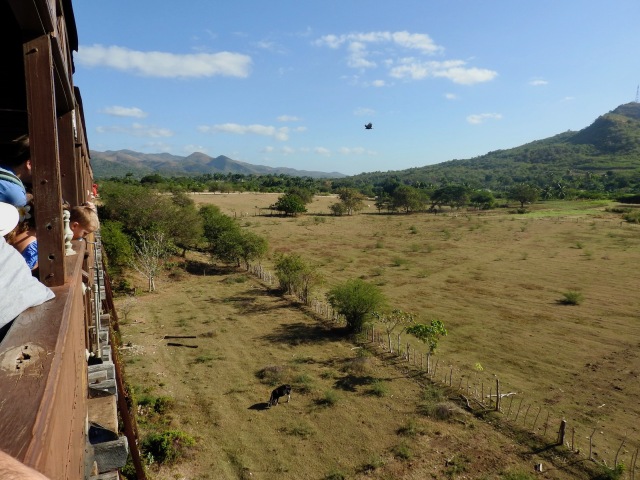 The scenery was beautiful framed by blue skies, dark hills and wispy white clouds. The verdant greens of the cane, the golden fields of straw and bright blue stretches of water sparkling in the sunlight. Oxen, cattle, horses and goats lazed, black vultures soared and snow white egrets cooled off in the waters. 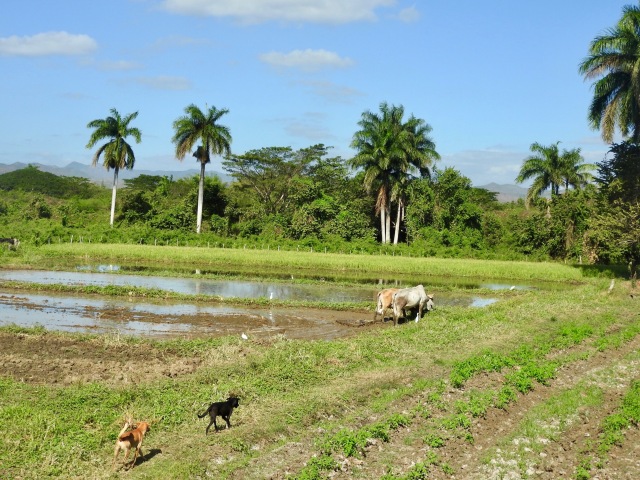 Farm workers tended the fields armed with scythes and baskets and the odd oxen-drawn plough turned the earth ready for more planting. As the train chugged gently through the flora & fauna, it was easy to feel tranquil and a thousand miles away from the normal stresses of life.

After an hour we made our first stop at Iznaga when approximately a quarter of the traveller’s left the train to join coaches. This meant we could stretch out a little and also swap sides to the shadier left hand of our carriage. It was also the opportunity to buy some refreshments from mobile vendors. 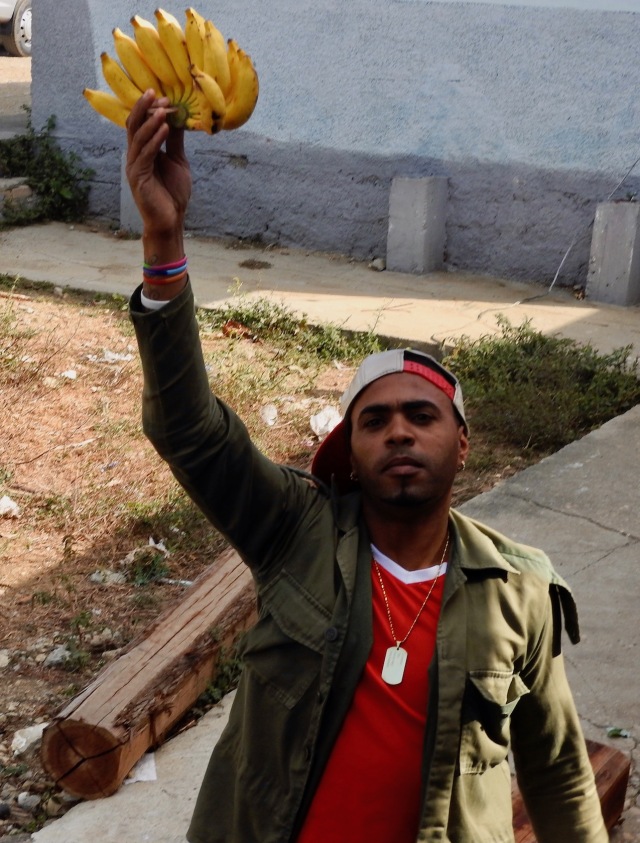 We then carried on to Feneta where we stayed for an hour to enable a visit to the sugar mill museum and the former sugar mill itself. It was also here that we saw a demonstration of sugar sap being extracted from the cane the old way by being pulled through amangel like device (see the Sweet on Sugar post). 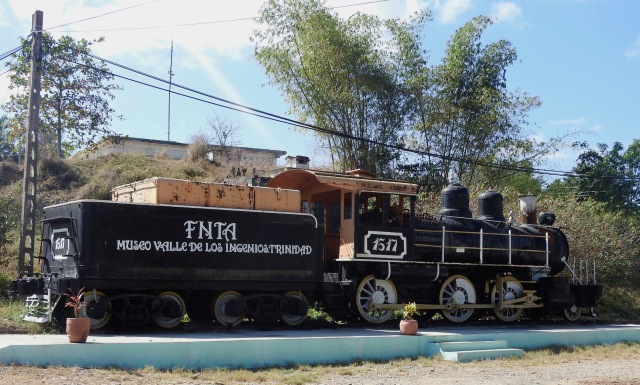 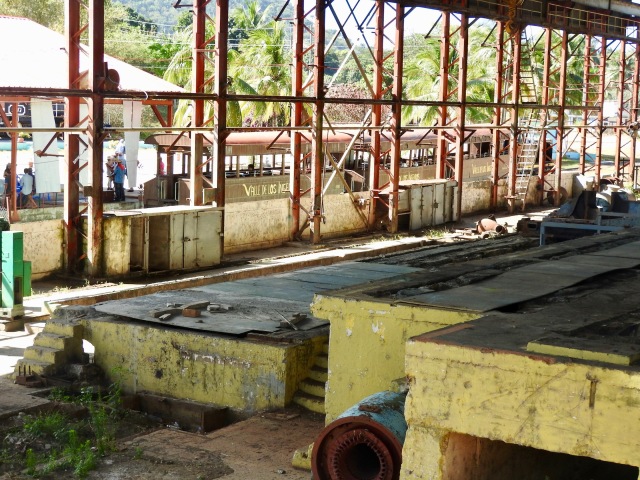 Whilst we were learning about sugar production, the loco reverted to push mode and was soon pushing us back to Iznaga.

We had another hour or so there, refreshing ourselves with delicious fresh coconut, first drinking the milk and then having the nut itself machetied into edible portions – see the video.

A few metres outside Iznaga the train track doubled with a loop to our right. This was the sign for the loco to be detached from the rear of the train and to trundle past the carriages into the near distance. 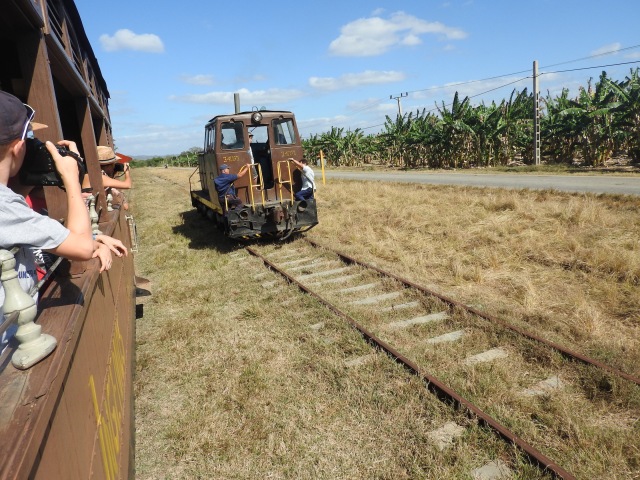 It then reversed back to be reconnected and began pulling once more. We imagined that it had been done this way for decades, with tourists replacing wagons filled with sugar products.

By 2.30 pm we were back in Trinidad again. A great way to spend five hours and going a long way to assuaging our need to take a train in Cuba. If there is a next time however, it will be on a scheduled service for sure. 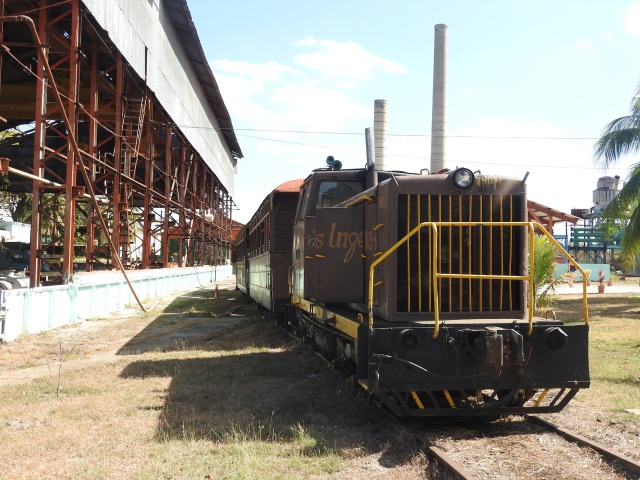 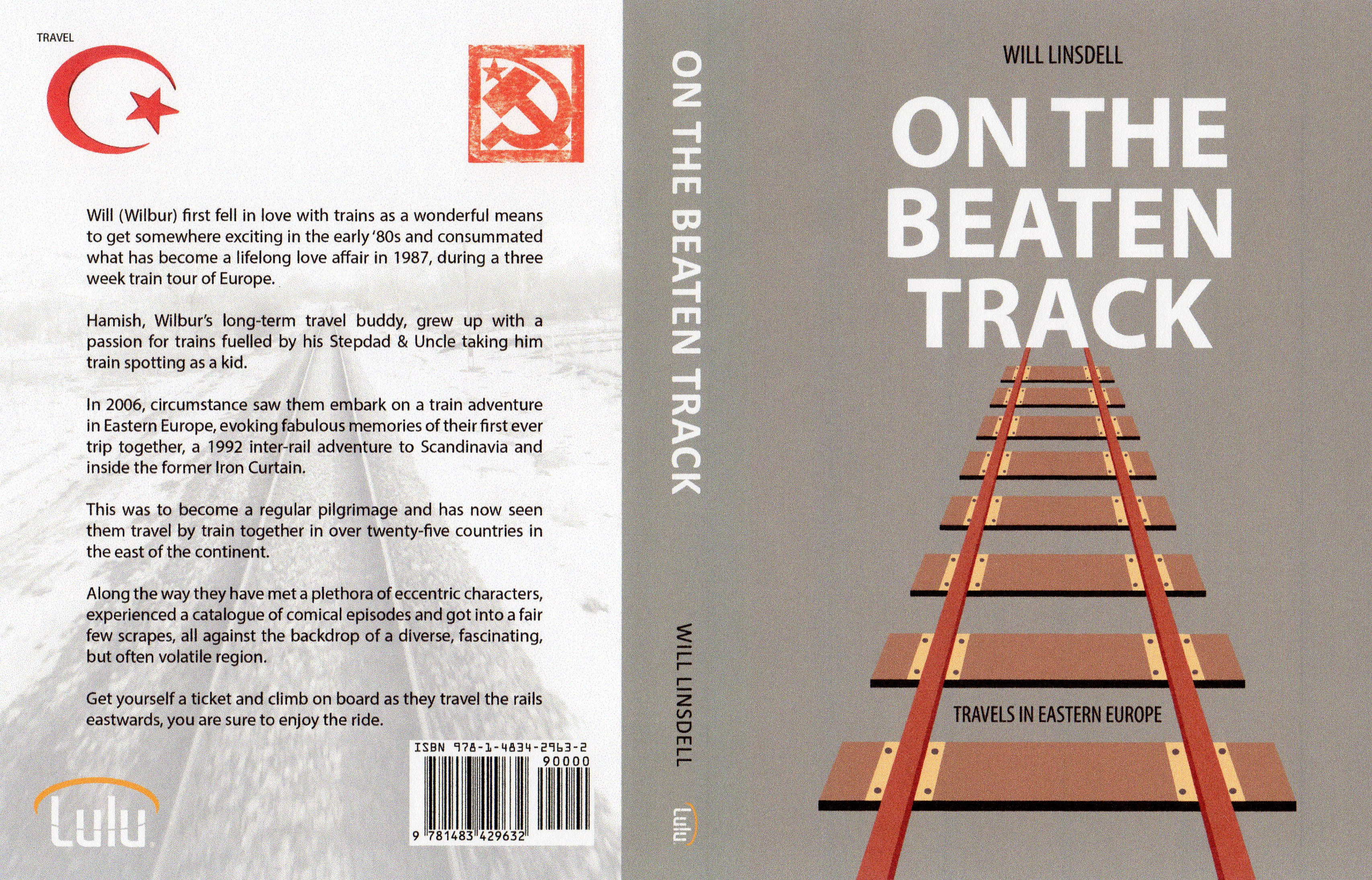