My favourite station ever visited is New York’s Grand Central. Until my recent trip to St Lazare in Paris in search of Monet’s impressionist inspiration, it was the only station I had ever been to not to travel but just to look around.

Not only that, it was amazing to visit at rush hour when thousands of people are rushing about. A time to usually be avoided if possible was the exact magnet that drew me in.

Just sitting in one of the eateries with eggs over easy, limitless coffee and OJ whilst watching the frenzy unfold was awesome.

NYGST is also the only place I have paid for a shoe shine. Next time I will have a haircut!

A station that I also love to visit is St Pancras in London. I have been there loads of times as my gateway to enthralling Paris, to just get home to Surrey on Thameslink or for a visit to the Midlands or North using the defunct Midland Mainline. 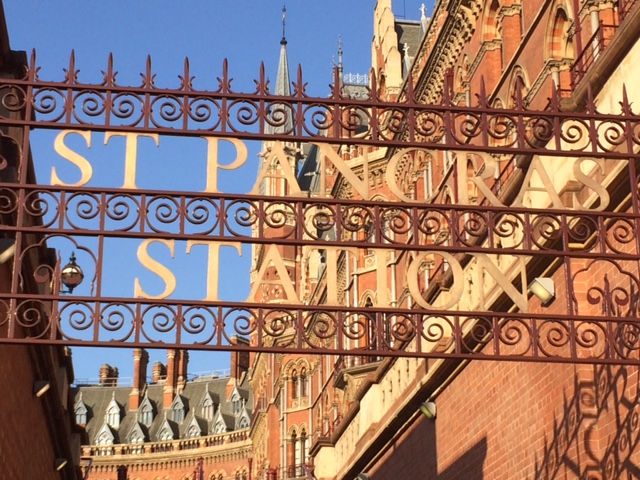 The other morning whilst waiting for my train from Kings Cross next door, I did the tourist thing armed with my iphone and viewed the station as foreign visitors do.

The building itself is a superb, a beautiful Victorian Gothic structure that was completed in 1868 but amazingly was scheduled for demolition in the ’60s. 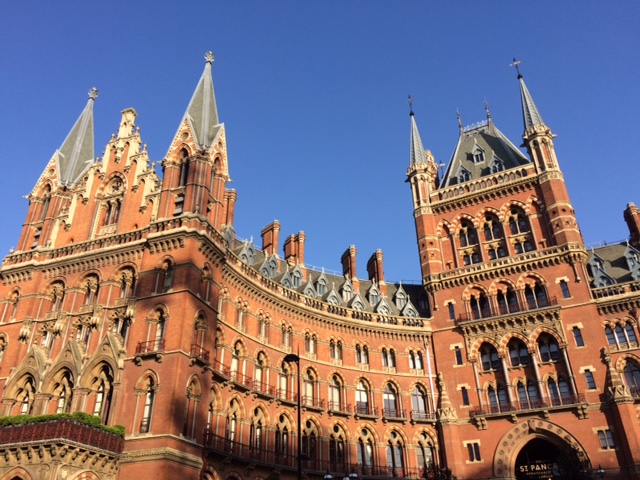 The station was preserved back then thanks to a campaign led by poet John Betjeman. Infinitely more impressive than next door King’s Cross Station, the station façade was used in the Harry Potter films as a stand in for its next door neighbour.

In the Chamber of Secrets, Harry & Ron flew to Hogwarts in Mr Weasley’s old Ford Anglia, which was parked outside St Pancras. As the intrepid pair fly off, they just about clear the iconic clock tower.

The station  was given a new lease of life between 2004 – 2007 in preparation for Eurostar moving there from its original home at London Waterloo.

The amazing rejuvenated glass & steel roof takes pride of place (the original was the inspiration behind many others worldwide including Grand Central in New York), drawing your gaze upwards to the upper level. 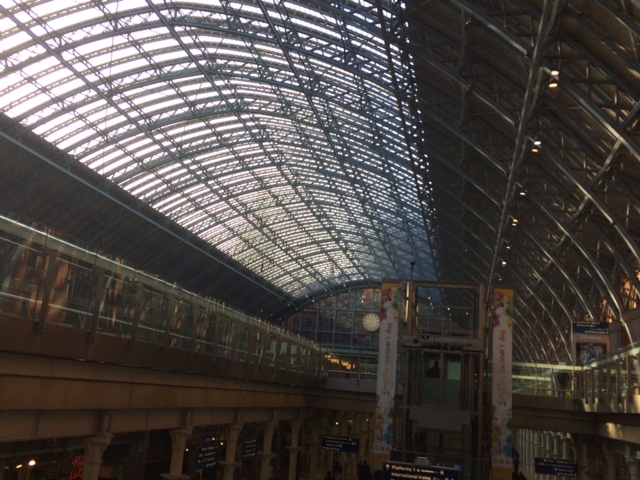 The ground floor is home to the Eurostar check-in and waiting area (sadly the worst part of St Pancras in my opinion), whilst East Midland trains to the likes of Nottingham & Sheffield as well as the Eurostar trains headed for Lille, Paris, Brussels and latterly Marseille, all depart from the upper level.

There are also a couple of pianos, one of which was donated by Elton John. I have witnessed a few more than capable players down the years.

Traveller’s at St P are also served by trains to the Kent coast and the massive Kings Cross St Pancras underground station.

On both ground and upper levels you will find plenty of dining and shopping options, making the station a great place to visit even if you never board a train.

Most notably you find Searcy’s champagne bar, apparently with the longest such bar in the world (even if it is square), the Booking Office restaurant and the Sir John Betjeman pub amongst others.

There is also agents to book your iconic overseas train journeys or, as I did, to grab their brochures from for a nice hour or so of escapism.

There are two statues upstairs too. A larger than life depiction of Sir John gazing upwards and the controversial bronze of a couple in embrace called ‘the Meeting Place’.

Some love it, but others hate it, perhaps due to the fact that the lady is checking her mobile rather than concentrating on her partner. 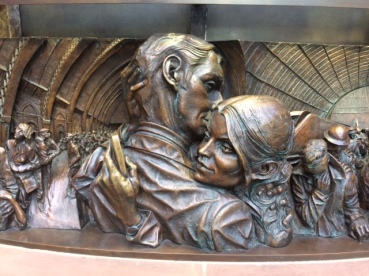 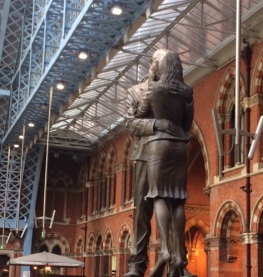 At base of the couple sculpted by Paul Day, there are depictions of Tube & railway history, some with a great depth to them.

The iconic Dent station clock also hangs upstairs high in the apex of the Barlow shed above the huge statue.

Finally there is a nice twist to the Olympic Rings that hung at the station for London 2012. They have been converted into seats, which now stand at the high speed Kent terminal. 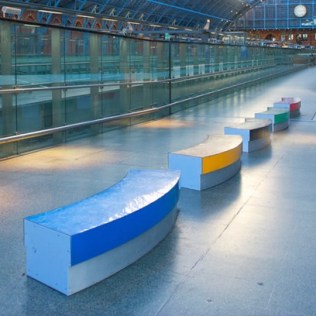