This was my first European train tour since my third and final inter-rail trip in 1992. 2006 was the year and the tour was not what we had to intended to do at all.

Our plan had been to take the Toros Express from Istanbul to Aleppo in Syria, but instability in the region had meant this would be out of the question unfortunately. We had however already purchased flight tickets to Istanbul so needed to utilise them somehow.

A couple of hours pouring over the Thomas Cook European Train Timetable gave us countless options, with us eventually choosing the itinerary shown above (plus a bus trip to Lake Ohrid from Skopje).

We had both been to Istanbul before so shunned the chance to revisit some mighty fine attractions such as the Blue Mosque & Topkapi Palace, instead just absorbing the city with the locals. We did however return to the Grand Bazaar, one of the world’s greatest indoor market places.

We did have one amusing episode when purchasing our international train ticket to Greece’s second city. This is how I describe it in my book:

‘We hadn’t been able to reserve our train tickets in England and on visiting Sirkeci station that morning at ten, we were told to return at three when the international desk would be open.

When we returned five hours later, the desk was indeed open. The same desk as we had enquired at earlier and with the same grey haired gentleman sat behind it. He now had a tent style card in front of him stating ‘international ticket sales’ and wore a blue peaked cap. No comment or query was necessary, just a wry smile and a nod. That was just the way it worked.

He then proceeded to write out our tickets in triplicate in extremely neat handwriting. I hadn’t seen carbon paper in a long while, but was pleased to see that it still had a purpose in life. After writing the tickets we were expecting our copy. Oh no, hold your horses matey! He had to record our purchases by hand into a huge ledger, taking extra care to spell our names exactly as they appeared in our passports.

A few ink stamps later and £80 in lire and the tickets were ours. The ticket seller twitched his grey cigarette stained moustache and smiled weakly as he handed the paper bundle over and wished us a good journey. Job done so we could now relax.

The whole process took a good fifteen minutes, before we were handed the middle sections of the trios and a receipt each. The top section was for the train guard and the bottom section for the desk spike sited behind the international sales manager. He managed to spike it without skewering his hand – years of practice had paid off.’

The overnight train to Thessaloniki was an absolute pleasure. The Dostluk Express was to be our transportation, hotel & restaurant all rolled into one. It was with great excitement that Hamish & I boarded for our first overnight journey since the Kemi to Helsinki route fourteen years previous.

Multi-functional, The Dostluk Express From Istanbul to Thessalonika

We slept brilliantly thanks in no small way to some EFES dark beer and awoke near the border with Greece for passport check and one of my favourite activities – breakfast in the restaurant car of the train.

We arrived around an hour late (no dramas thankfully despite the penultimate stop being a place called Drama!) and after checking in to our hotel and practicing my schoolboy standard Greek (ehoume ena vormatia me vio krevatia yia vio nikta parakalo) we went for an orientation walk taking in the very nice waterfront with its giant blue jellyfish, the iconic White Tower and the statue of local Greek hero Alexander the Great on horseback.

A highlight of our stay was the Ochi (Greek for ‘no’) Day parades. This is held on 28th October every year to commemorate the day in 1940 where Prime Minister Metaxas denied Mussolini’s ultimatum to allow Italian troops to station themselves in strategically important areas of Greece.

The parades are a show of military might (akin to North Korea’s latest) and also a chance for students and youth groups to march. Very colourful and an excuse for a party too.

Before we headed north to our next country, we went south for a day and night to incredible Meteora (translates to ‘suspended rocks’ in Greek) to walk amongst monasteries and convents perched seemingly precariously high on the rocks.

With the advent of roads and bridges these are now easily accessible, but centuries ago they were pretty much impregnable fortresses away from the Ottomans who occupied most of the country.

In their heyday the only way to get food & supplies to them was by using large pulleys. Thankfully the monks & nuns were self sufficient for a lot of their food, water & fuel so Masada type sieges were avoided.

After taking the train back to Thessaloniki for a night, we caught our next train, the early morning departure to the Former Yugoslav Republic of Macedonia, to give its official name.

Skopje itself was not very exciting. A lovely stone bridge, interesting Islamic quarter and that was that. We only stayed a night before heading by bus south to Lake Ohrid. 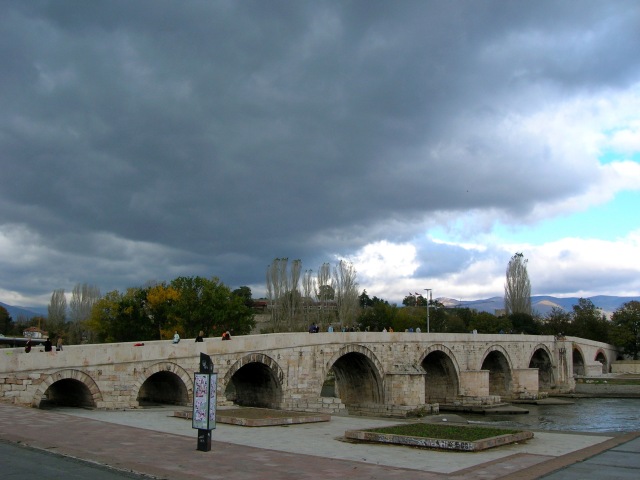 Ohrid was beautiful and whereas the capital was cold and windy, the weather by the lake was warm and the breeze light.

We had a fine time chilling by the waters, largely relaxing, eating & drinking. We however avoided the temptation to dine in the fish restaurant serving freshwater crap and grilled squits! I kid you not……

We took a trip round the lake to Sveti Naum close to the Albanian border. The place was famous for its albino peacock, with no end of souvenirs adorned by its image. We went off in search of the red-eyed fowl, only to discover it had died a couple of years previously. That wasn’t going to stop them cashing in on the legend – well at least it really existed unlike (probably) the Loch Ness Monster. 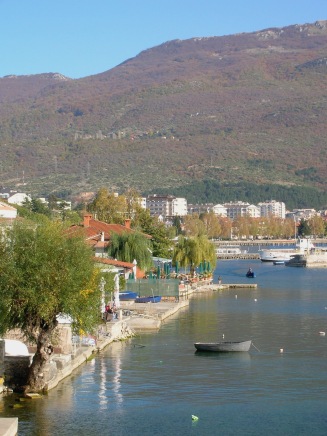 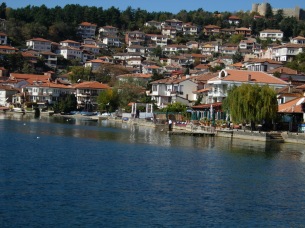 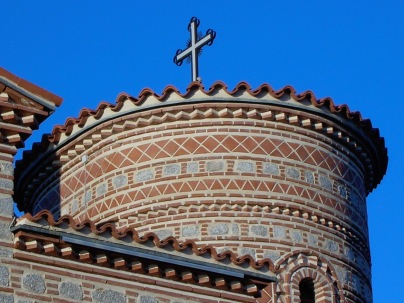 After a memorable for all the wrong reasons (for me anyway) bus journey back to Skopje, we took the afternoon train to Niš in Serbia.

The bus was comfortable enough, but I faced a couple of rather embarrassing situations involving holding up the departure and then feeling the full wrath of an elderly women. It’s too painful a memory to recount again, but the episode is explained in my book.

Niš was if anything blander than Skopje. It didn’t really have anything to merit it apart from it being the place that we first sampled the best dark beer either Hamish or I had ever tasted. Nikšićko is its name and to this day it remains number one in an ever-growing list of dark beers sampled east of Vienna and west of Iran.

The other thing that made Nis memorable was our journey to Sofia. This was the coldest, longest drawn-out and bizarre train trip I have ever been on. I have already blogged about this journey which related below zero in both the temperature & enjoyment stakes. Here are the tawdry details:

Our train had started in Belgrade and was destined for Istanbul. Despite starting in the same country (Serbia) it arrived over an hour late for the 163 KM leg from Niš to Sofia.

We waited impatiently with hordes of luggage laden Serbs, as snow fell heavily around us. The train had been due to arrive in Sofia at teatime for a last evening hurrah before our flight home.

As it eventually set off, it was very clear that the train was moving decidedly slowly, so we soon started speculating about the actual arrival time – predictions were pretty bleak by all accounts.

Hamish & I shared our carriage with what appeared to be the only other English speakers on the train – a couple of Canadian girls and an American guy.

Our transportation eventually crawled into the border station over three hours late. By this time it was starting to get extremely cold and it soon became clear that the heating system had packed up.

We were then treated to an episode straight out of the Keystone Cops as we moved forward out of the main train station and stopped just outside in a siding.

Surrounded by razor sharp barbed wire, in the middle of absolutely nowhere, we were to stay parked up for over two and a half hours.

The train guard and driver considered it their duty to try and fix the heating for the suffering passengers, many of whom were pensioners.

Armed with one screwdriver and some pliers, they proceeded to open every panel above the compartment doors to locate the wiring. 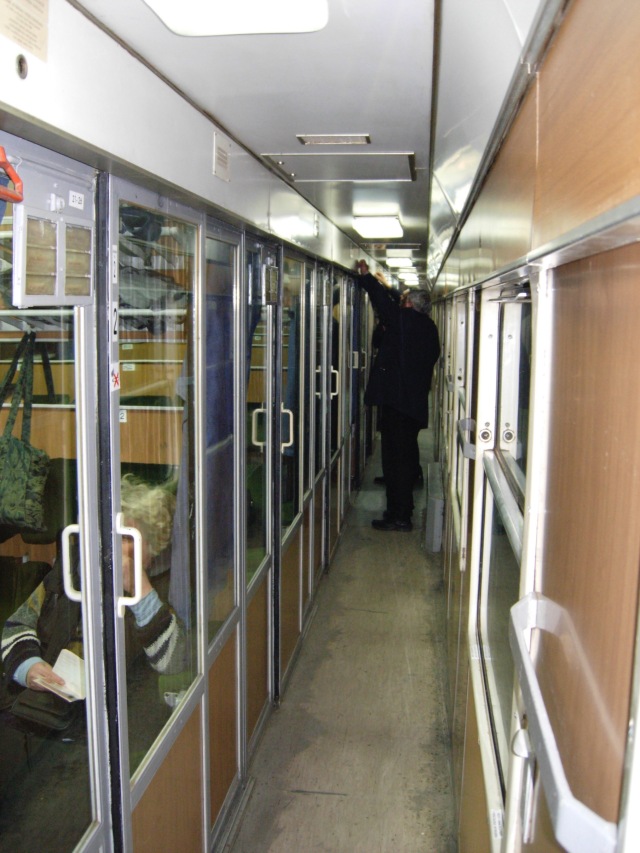 They then proceeded to bang and prod blindly in the forlorn hope that somehow miraculously their actions would inspire the heating to start working again. Of course they were unsuccessful.

Why they had not phoned through to Sofia to request a heating engineer and just got there as fast as possible I have no idea. At least that would have saved us 160 minutes of misery.

As darkness fell and the temperatures dropped below freezing, we were now wearing much of the contents of our rucksacks. Jumpers, scarves, hats, gloves, thick socks, fleeces. All five of us now resembled Michelin men. I hadn’t noticed that Hamish was the only one of us not to put a hat on – he was to pay for this mistake later on.

I tried to speak to the guard to find out their full plan but he did not speak English, German, French or Greek, so we remained totally in the dark in more ways than one.

The cold and gloomy conditions got us talking to our companions. Food was shared by torchlight, travel stories told and jokes concocted about our current predicament.

After a couple of false starts we finally left. No heat or light, but at least we were moving. The whole train cheered.

Our ‘express’ was still travelling way below optimum pace and was now over five hours late.

We had run out of food, conversation and any inspiration by the time we finally crawled into Sofia an excruciating six hours late.

It Could Have Been Worse!

Bading our fellow travellers farewell, we went off in search of a taxi to take us to our reserved hotel. It was now after 11 p.m., so all notion of a last night jolly was blown out of the water. The train still had to get to Istanbul, another 550KM. We felt really sorry for the two old ladies that we saw board as we alighted. At the current rate it could be days before they reached Turkey!

So exploring Sofia would be for another year – 2012 to be precise.

The trip really did evoke those youthful inter-rail days. Despite being older, richer & (supposedly) wiser, we still encountered hardships, mishaps and embarrassment, but as ever this was outweighed by marvellous experiences and a good deal of laughter.

We were hooked all over again and vowed that we be repeating the formula again in the very near future (the following year starting in Tirana & ending in Dubrovnik).