Gdansk to Kaliningrad to Minsk to Vilnius

This trip started in the home of Solidarity, followed by a bus to the secretive Russian enclave, home of its Baltic fleet, a train to one of Stalin’s favourite cities and finally on to the capital of Lithuania.

Gdansk turned into a gem of a visit. The shipyards where Lech Walesa led the Solidarnosc Union from a vehicle to look after ship worker’s rights to being the governing party of post Communist Poland with Lech himself president, were a fascinating insight into the movements that led to the collapse of Communism and the fall of the Iron Curtain.

We stayed just outside the old town, a stone’s throw from the Green Gate entrance to the historic walled settlement. The buildings resembled the tall, narrow, gabled variety so familiar to the Netherlands. They had been built when Gdansk was a prime member of the Hanseatic League and one of the most important ports in Northern Europe. 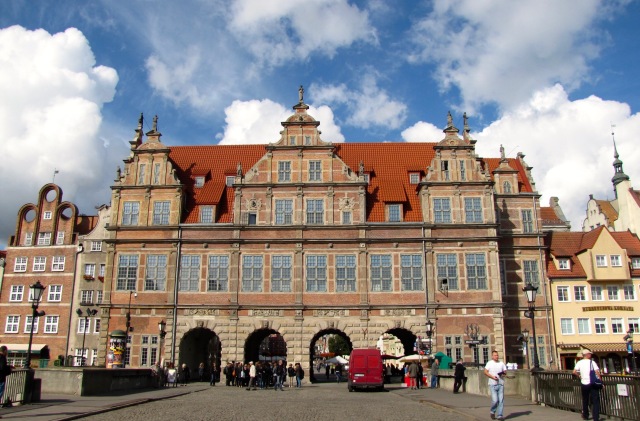 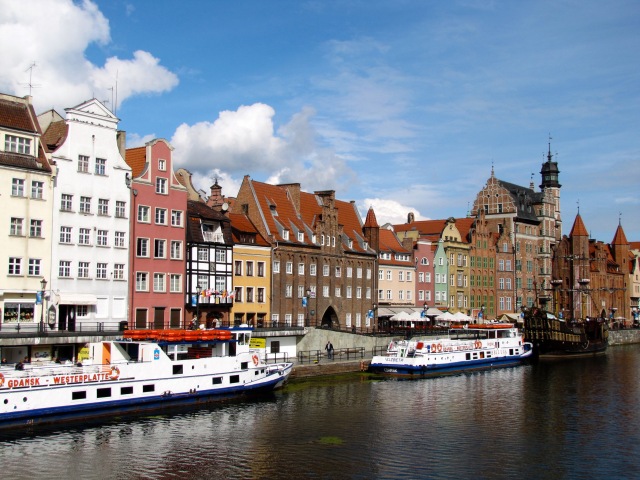 Our first evening consisted of pizza & dark beer, made all the more memorable by the antics of a local character. My book describes the scene thus:

As we munched on our veggie specials the size of satellite TV dishes, we noticed a guy who appeared to be the owner.

He was short, in his mid-sixties and wore a Lowry period flat cap. He sat at a table adjacent to ours with a very attractive lady with long black hair, who we presumed to be his wife or more likely girlfriend.

She wore a short and clingy purple dress leading to stunning long legs topped off with thigh-length high-heeled boots.

All the time her male companion totally ignored her as he avidly watched the Naples v Dortmund football match on TV, letting out gasps and holding his head in his hands whenever Dortmund, who trailed two-nil, went close to pulling one back.

He also got up every ten-minutes or so and still transfixed to the screen, poured himself a beer.

After  his third beer trip he was returning to his seat as Dortmund scored. This made him shriek, punch the air and spill most of his beer!

What was a sixty odd year-old Pole doing supporting a German team so passionately – did he not know anything about history?

At the final whistle he whipped out a piece of paper from his top pocket and kissed it, before breaking the silence that remained with Miss Purple by giving her a smacker square on the lips.

Clearly he had a bundle of money on a 2-1 result and was now zlotys in. Nice one.

He celebrated with more self-service beer and a vodka chaser, whilst the long limbed beauty disinterestedly went back to her book.

Next morning we headed back through the Green Gate, across the cobbled streets and out the other side in the direction of the cranes that heralded the shipyards. Solidarnosc flags adorned the entry gates and we were free to wander as we pleased amongst working bulldozers, winches & pulleys loading & unloading ships and busy barges, welders and crane operators. 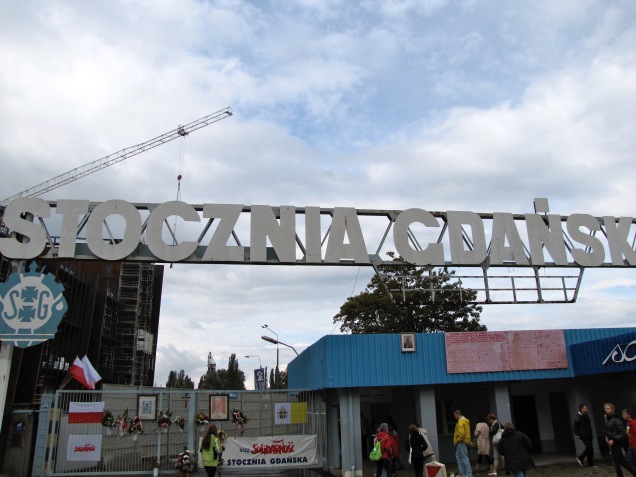 In the U.K. we surely would have been denied access or at least had to have worn hard hats. Health & Safety clearly had a different meaning in Poland however, and mighty glad for it we were as we viewed the hive of activity before us.

We took in the Solidarnosc exhibition and read how the swell of public action that started at the shipyard supporting workers suspended for belonging to an illegal union, had mushroomed into a mass show of disaffection with the quality of people’s lives, State control and Communism as a whole.

An image of a statue of a worker dressed in hard hat and with arms held aloft, featured all over the place. Expecting to see the actual life-size statue somewhere within the complex, I was slightly disappointed to learn that it was in fact the tiny figurine that stood on the table as Lech Walesa negotiated with Communist Party leaders the conditions for a Poland totally detached from the influence of Moscow.

Gdansk therefore holds a massively important place in the history of modern Europe as Poland was the catalyst that led to revolution and change in Czechoslovakia, Hungary, East Germany & the Soviet Union as a whole and the fall of the Berlin Wall.

If that isn’t enough history for you, nearby Westerplatte was also where the first shots of WWII were fired.

Sadly the train to Kaliningrad no longer ran, meaning a 7am bus ride to the rather odd city.

The place is of strategic importance to Russia, despite it being bordered by Poland & Lithuania only. Not only is the Baltic fleet based there, but it also gives Russia a presence right amongst NATO & EU countries.

The city was rather grey and it was fitting that we arrived in rain. It was great to be there though as the place felt very different. Entertainment was scant aside from an excellent maritime museum whose exhibits included a Foxtrot Submarine, a warship and a scientific exploration vessel, all of which we entered for a fascinating insight to life above and below the waves. 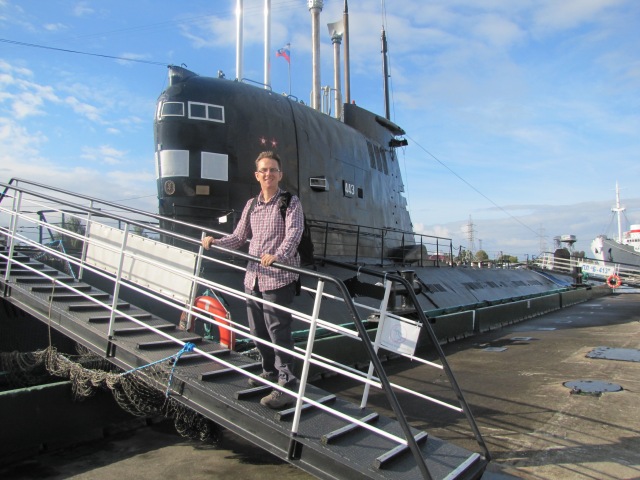 Me Outside & Inside The Foxtrot Sub

Sunset Over The Maritime Exhibits

On our second day, we took a train to the Baltic Coast and Svetlogorsk, a bracing resort situated in an area where a staggering 90% of Europe’s amber (bernstein) is mined. What you could not buy as a souvenir made out of the stuff was not worth imagining.

The train journey was my first in Russia. Not exactly the trans-Siberian, but fun all the same. 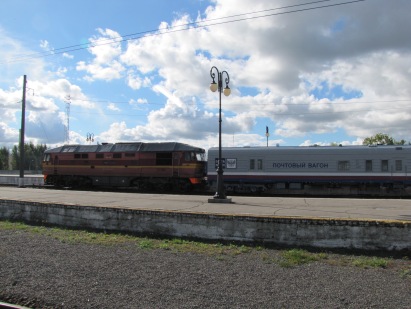 When we got back we took in a very atmospheric organ recital in the cathedral, before our final evening out when Hamish found himself the unwanted subject of a local lady whose lust had been fuelled by far too much vodka. That is a tale that is told in my book and is not for these pages!

Next day we set out for a long train journey through Lithuania and in to Belarus. Our train ran on Moscow time (1 hour ahead of Kaliningrad), but we were well prepared for this seeing as Hamish had already undertaken the Trans-Siberian where all trains ran to the same Moscow time rule.

The 541KM would take us over 11 hours allowing for border controls and did drag a tad once darkness fell and we were very happy to arrive before midnight. We decided on a dark beer nightcap in the hotel bar before retiring and were at first intrigued and then pretty appalled to find that our four-star hotel doubled as a pick up place for female escorts.

Happily we were scruffy enough not to be mistaken as would be clients, but some of the fat, ugly businessmen/gorgeous, young female combinations were skin crawlingly wrong. Each to their own I suppose.

Our three days in Minsk were very enjoyable as we explored the large city, a place that was bestowed hero status by Stalin for the region’s sizeable efforts in WWII in inflicting heavy losses on the German enemy. Stalin therefore lavished riches on Minsk in creating majestic buildings, expansive boulevards and fountain-filled parks to help the war damaged city rise from the rubble. 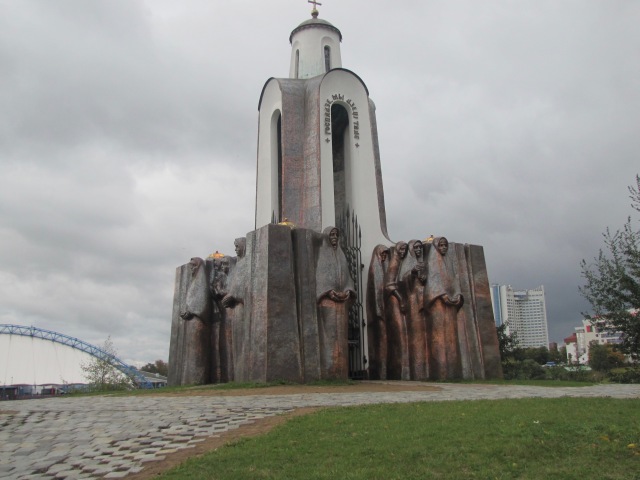 During our time in the capital we saw just about everything there was to see including a visit to the State Circus and another to see Cinderella performed at the National Opera House. Minsk had a very Russian feel, epitomised by the huge Lenin statue and the vast ex-HQ of the KGB. 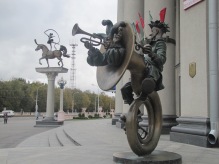 Our final train journey to Vilnius was on a sleek new electric train in contrast to the diesel pulled relic we had arrived on. We were whisked the 200KM to the Baltic State capital in 150 minutes, giving us ample time to explore Lithuania’s premier city.

A very enjoyable time we had too as we strolled through the walled city, an area clustered with historic buildings throughout the cobbled streets. We were happy just to wander pretty aimlessly and take in whatever we came across. Bohemian Uzupis was particularly interesting with its unusual shops and an extravagantly dressed mannequin positioned on the square in such a way that you had to take several takes to realise it wasn’t a real eccentric person.

That evening we dined and drank in a bar with its own brewery. The golden ale brewed with marijuana seeds was especially refreshing!

Our early morning departure heralded the end of another fine eastern sojourn.