I recently returned from 17 days in Turkmenistan & Uzbekistan and of course train travel featured along the way.

First up Turkmenistan. The nation is covered 80% by the Karakum Desert, which is now home to much of the train track in the country.

Capital Ashgabat is the hub and journeys seem to be almost exclusively inter-city with little or no stops in between.

The main routes are west to Turkmenbashi on the Caspian Sea, north to Dashoguz close to the Uzbek & Kazakh borders and east to Mary & then Turkmenabat, also on the Uzbek border.

The Mary train actually now continues to Serhetabat near the Afghan border (the line in fact now goes into Afghanistan to a place called Turgundy, though this is for freight only with the passenger border officially closed).

Let’s start in the capital with its train station. Like most of the city it has been renovated in grand style in white marble in a funky design. It was actually one of the few buildings to survive the devastating 1948 earthquake, not that it bears much resemblance today.

We would be catching a train from there, but first up we had a road trip to the famous Darvaza Gas Crater 270 km north of Ashgabat. See it burning HERE.

The road cut through the desert parallel to the train line for Dashoguz. This was to be our first sighting of trains as they cut a dash between the dunes, albeit these were freight trains.

Our own train next afternoon from Ashgabat was for Mary, 227 miles east from the premier city. The journey was to take 8 hours with our arrival after midnight. That’s pretty slow going (average 28.5 mph), just as I like it on my overseas travels!

Officially we were not allowed to take photographs, but our guide managed to persuade the officials to allow a couple. I also sneaked in a couple of unofficial ones for good measure! 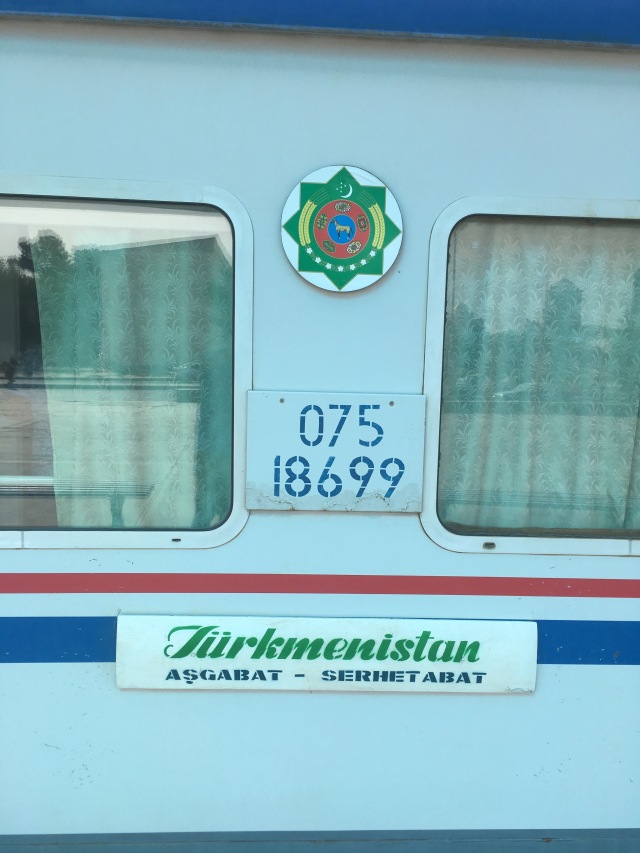 The scene outside was pretty much desert all the way once we left the city, so I do not think we missed too much when darkness fell. This led me to continue reading Matthew Woodward’s excellent book detailing his adventurous train travels from UK all the way to Singapore, entitled ‘A Bridge Even Further‘.

It was also time for tea thanks to the on-board samovar and the loan of a very nice teapot and china cups from our friendly train guard. He even let us use his own personal loo so we could avoid the Turkish one that was generally on offer!

We had paid around $4 for our standard seats in our basic compartment that would convert to 4 berth sleeper for the overnight section south towards Afghanistan. The tickets had been booked by Owadan Travel for us.

We were obliged to use an agent for the trip because firstly we needed a letter of invitation and secondly in all but Ashgabat, travellers have to be accompanied by a guide at all times by law. Not quite North Korea but certainly some similarities (all social media is illegal in the country too with websites all blocked).

We had the compartment to ourselves in the event, so were able to relax once we had stowed our rucksacks below our seats. This entailed lifting up the seat and putting our bags in the space below, aided by a pal’s foot acting as a prop!

We arrived around 30 minutes behind schedule to a station platform thronging with life. Luckily we could skip past the taxi scrum and avoid all the cigarette sellers (smoking is actually officially banned in Turkmenistan) to meet our driver for the next two days.

We paid a visit to the station next day to get some pictures. Our guide said we would be fine taking them. However he had meant outside was fine and I did get a rollicking from an official for taking one or two inside. Oops! 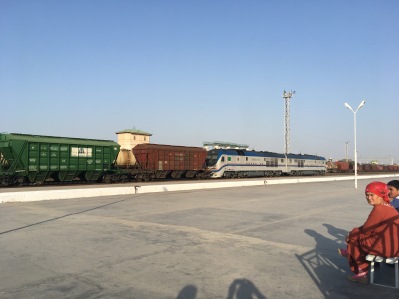 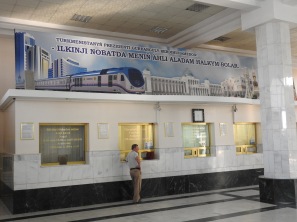 Engines and carriages were not the only type of train we were to see in Mary region, with a camel variety spotted in Ancient Merv.

Our time in amazing Turkmenistan was coming to an end. There was just one journey to do with a drive to the Uzbekistan border at Farap. There is a train to nearby Turkmenabat from Mary but our agents insisted that the times did not work for us with trains either arriving late at night or in the early hours.

We were sceptical that this was in fact the case, a feeling that was amplified when we saw a passenger train snaking through the desert as we drove. “Special train for oil workers,” our guide automatically ventured, instantly suspecting the thoughts that would be going through our minds right then. He wasn’t wrong!

Mmmm, not sure. However it was too late and we had to satisfy ourselves with some shaky video instead. Click Karakum Train to view it.

Getting reliable train information in Turkmenistan is pretty difficult. There definitely seems to be at least one train a day between the major cities either way. Our agent was only able to book our train from Ashgabat to Mary two days before it ran so we had left the UK not certain if we would be able to take it. My advice would be just to go with the flow, have a good idea what you want to do and trust an agent to sort it.

Anur Tour who booked our Uzbekistan train tickets have a good train section covering all the Stans. This is what they publish on their website about Turkmenistan. I actually know this is not fully accurate as our train to Mary left at 16.40 not 18.20 as shown below, but it gives you a good general idea. 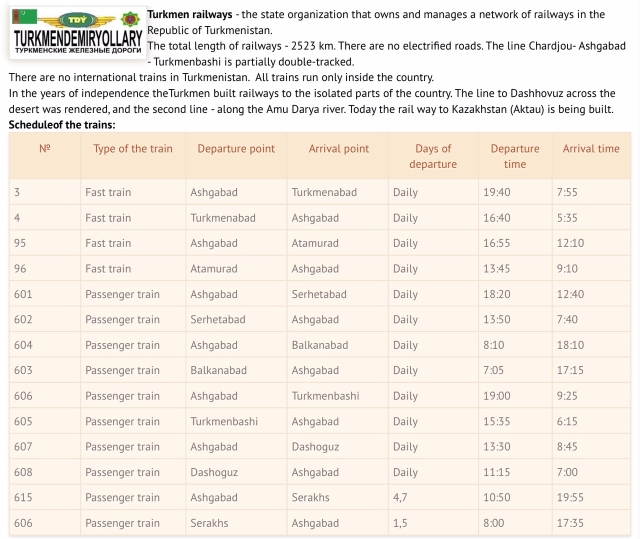 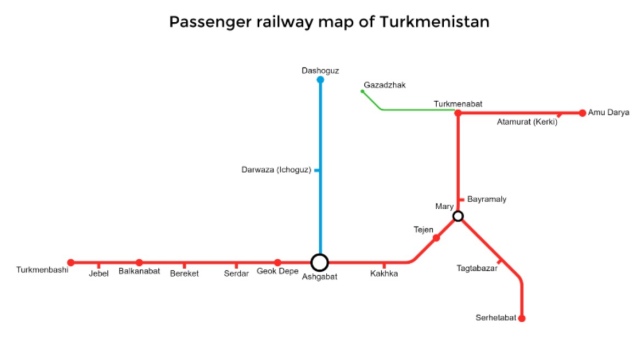